LAHORE: The sneaker game has been going quite strong since a while now and major fashion brands launching their own versions have kept us on the edge of our seats! But while we were busy drooling at and saving up, for some gorgeous footwear, CAT Footwear has sneaked into the game with their bold and nostalgic overbuilt design called the ‘Intruder’ and boy, are we excited!

A part of their recent Repowered Series, the Intruder is a gorgeous and chunky footwear, completely in line with the current trend but also with a hint of nostalgia of the ‘90s. This is the perfect footwear to help you stand out from the crowd and it has taken the market by the storm internationally. So imagine our surprise when we saw these beauties available in Pakistan!

Upon some further sleuthing, we discovered that Firhaj Footwear Private Limited is the sole licensee of CAT Footwear Global in Pakistan and the very reason these sneakers have made it to the stores so soon!

Intrigued as to how they managed it, we reached out to their Category Manager Kashif Khan and here’s what he had to say, “In Pakistan, most articles arrive when the hype has already died down internationally, we wanted to make sure that our consumers have the ‘Intruder Experience’. With many famous brands venturing into this category, it gives CAT Footwear competitive advantage; we are here, we are cool and we give you value for your money.”

The Intruder has been all over Instagram! Easily paired with chic outfits, this one’s for the win! What’s more, is that local celebrities have been spotted rocking this dad trainer. Shahroz Sabzwari shared a picture on his Instagram, sporting this latest sneaker, while Faysal Qureshi actually wore these to his TV show. 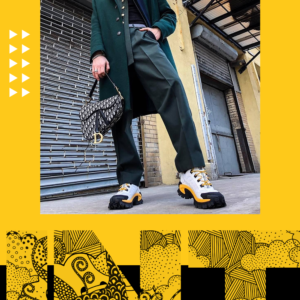 Chatting with the Marketing Manager at CAT Footwear – Ravia Omer Khan, we asked if this was a marketing gimmick by the brand to get the attention of consumers, she said, “It was all organic, we got an overwhelming response as soon as we launched and our social media was flooded with messages of love for this product and some customers actually ended up buying both colours. The product really speaks for itself, from the fashion-forward design to the colours to its durability, it is literally the perfect fit! It was an instant success globally too and this design was featured in various magazines including GQ”

To know more about the response of its sales, we reached out to CAT Footwear’s Merchandising Head, Rizwan Siddique, and he revealed, “Intruder was a success as soon as it hit our stores- both online and brick and mortar. We distribute CAT Footwear through 50 stores of Hush Puppies, a sister-company, across Pakistan. The response was unbelievable as we were almost sold out within just a month of launch. This was just not a product, but we witnessed customers enjoying the whole new experience of the CAT Footwear brand within this one specific style.”

The Intruder has done quite well in the local market and despite the pandemic, sales have significantly improved for the brand. We asked CAT Footwear Managing Director Mohammad Qasim, why he thought the numbers have improved and he explained, “The pandemic drove everyone to the official CAT website and that is a significant reason for the surge in sales because consumers understood that we are the originals and Caterpillar Inc. is credible as it is one of the top 100 brands worldwide. Moreover, introducing a sought after article so early on has given us quite the advantage but that’s not all, there’s a lot more in store!”

It looks super posh and trendy and is as comfortable as it gets! While Intruder is completely sold on CAT Footwear Pakistan due to its unbelievable demand, we can’t get enough of it! CAT Footwear is now launching a new sneaker every month, so if you are looking for a sneaker that is easy on the eyes but even easier on the pocket, you know where to shop!