Olympic champion Elaine Thompson cruised to victory in the 200 metres at the Anniversary Games in London on Saturday as home favourite Laura Muir destroyed the field in the 1500m.

Jamaica’s Thompson, who won a 100m and 200m sprint double at the Rio Olympics, claimed victory in a time of 22.13sec, with Marie-Josee Ta Lou of Ivory Coast second and Britain’s Beth Dobbin third.

“I’m feeling great to be back in London competing over 200m,” said Thompson, quickest over 100m and 200m this year.

“It’s all work in progress. It’s a long season so I just came out here to perform and enjoy it.”

With the US trials for the world championships taking next week, no Americans are taking part in the men’s or women’s 100m and 200m at the two-day meeting, which is part of the Diamond League series.

In the men’s 100m, South Africa’s Akani Simbine (9.93sec) beat Britain’s Zharnel Hughes into second place in a race in which five runners dipped under 10 seconds.

Former world champion Yohan Blake was third in a time of 9.97sec.

Scotland’s Muir won the 1500m in a time of 3min 58.25sec, seeing off the challenge of Kenya’s Winny Chebet after a blistering final lap.

“There’s huge strength in depth of the fields here, so you can run a world lead at one event and then someone else will do it at the next,” said Muir.

“It really helps keep pushing you on. It’s great to have so much competition. My goal now is to win a medal in Doha (2019 world championships).” 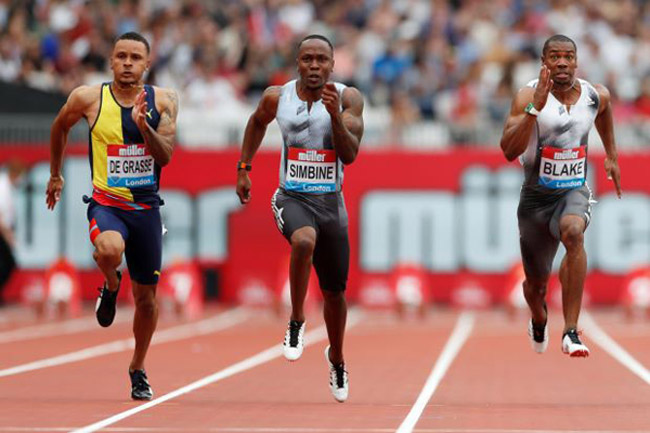 European champion Ingebrigtsen’s time of 13:02:03 was a new national record.

Gebrhiwet, the third-quickest over the distance this year, said he was “pushed all the way to the line” by the young Norwegian.

Ingebrigtsen said: “I was fast over the last kilometre. I’m definitely able to go under 13 minutes. I was hoping for a personal best, but a national record is better.”

Jamaica’s Shericka Jackson won the women’s 400m in a time of 50.69sec and compatriot Danielle Williams won the women’s 100m hurdles in 12.32sec, the fastest time of the year so far.

Tatsiana Khaladovich of Belarus won the women’s javelin with a throw of 66.10 metres while Anzhelika Sidorova (4.75m), an authorised neutral athlete, won the women’s pole vault.

After London there are Diamond League events in Birmingham, Paris, Zurich and Brussels in the lead-up to the world championships in Doha, which start on September 27.

Bolivian mob attacks politician, cuts her hair, cover her in paint and force her to march barefoot